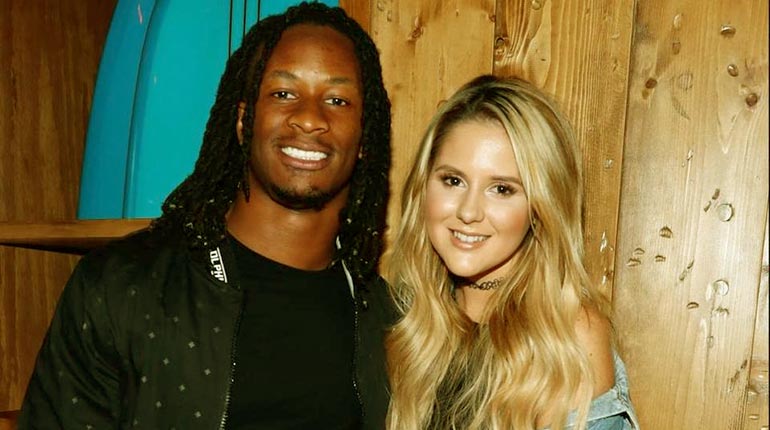 Todd Jerome Gurley II aka Todd Gurley is a pro-athlete from Baltimore who features in the NFL. He was drafted into the league five years ago by the St. Louis Rams. A remarkable first season saw him receive the Offensive Rookie of the Year Award. However, his career has been stalled by a few injuries, one of which resulted in the Rams annulling his contract.

After this, he signed on for the Atlanta Falcons. Let’s read about the Falcons running back and his wife-to-be Olivia. Explore details regarding his salary and current net worth.

Who is Todd Gurley?

Todd Gurley is an NFL running back who plays for a team in Atlanta. He was born on the 3rd of August 1994 in Maryland. Gurley is the son of Darlene and Todd Sr. The Falcon running back grew up alongside four other siblings: Shannon, Tarik, Princeton, and Davon Gurley.

Todd Jr.’s educational background entails time spent at Tarboro High School. He later got a full ride to the University of Georgia, where he played for the Bulldogs. Other than playing Football, Gurley was also on the school’s track team during the bulldog’s off-season.

Most people will not be aware that Todd even made the US National Team for the World Youth Championships.

The Falcons Running back and Olivia met a few years ago at the University of Georgia. Both were students at the Institution at the time. Todd was a football player and track & field star. Being a prominent athlete made him a very prominent bachelor.

Olivia eventually caught his eye, and the two started dating. They stayed together even after Gurley was drafted to an NFL team. The very next year, they were photographed at the video game launch for Gears of War 4. The game’s parent company had likely brought Todd on to promote the product’s launch.

Olivia even attended several games while Todd was a running back for the Rams. It is fair to say that she was a supportive partner. Additionally, prejudice is one hurdle that interracial couples have to manage, especially in the South. We are quite sure that Todd and Olivia must have had to deal with a fair share of idiots while they were together.

When Will Olivia Davison be Todd Gurley’s Wife?

Todd and Olivia Davison will not be walking down the aisle anytime soon. We’d love to say that this was because of the global pandemic, which has put the world on pause. But the truth is, the two haven’t been together for a while now. How do we know this?

Well, late last year, on December 19th, to be specific, Olivia took to Instagram to share pictures of a wedding she had attended in Hawaii. One fan commented that Todd Gurley had not been the same player ever since they parted ways. Olivia all but confirmed it afterward.

On an Instagram post made on February 9th, 2019, Olivia also said that she was trying to be someone’s catch. The implication is that she is single.

Olivia Davison is a businesswoman and social media personality. She is the co-founder of Liv Lively Salon & Boutique. As the name suggests, Liv’s business offers services like hair styling. They all sell designer hats, sunglasses, makeup kits, and perfumes.

Todd Gurley’s girlfriend Olivia also runs an online store, Liv Lively, that sells accessories like jewelry and clothing items such as tops, rompers, jumpsuits, and dresses. A look at her Instagram account revealed that Olivia is a native of Bozeman. Her account has 11,000 followers. She mainly uses this platform to promote her business, Liv Lively. We also get the impression that Davison was born with a bit of wanderlust.

Her page is filled with pictures of all the exotic places she has visited. These include places like Kaanapali, Maui, Puerto Vallarta, and the Bahamas.

Todd Gurley Net Worth and Salary.

Athletes like Todd tend to make quite a bit of money. Let’s see how much the former Rams’ running back earns. Two years ago, he received a lucrative contract extension from the Rams worth $60 million. It came with a guaranteed $45 million upfront, which he pocketed.

At the time, it made him the top-earning running back in the league. Unfortunately for Todd, the Rams canceled this contract this year after his performances dropped. He was still owed $20 million dead caps by his former team. Todd was eventually picked up by the Falcons.