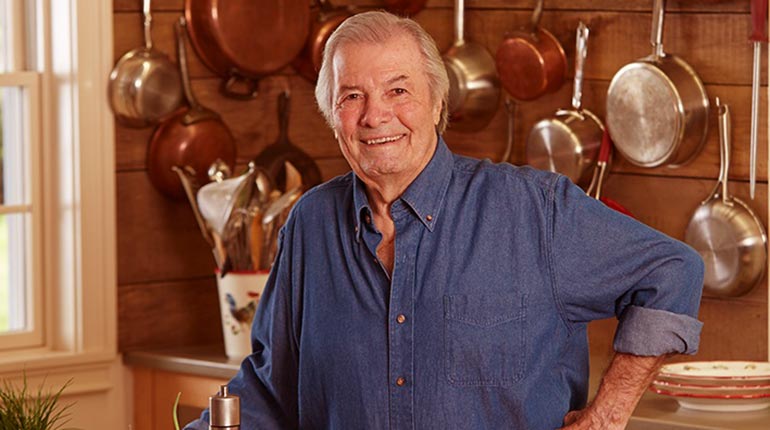 Going by his skill set, his portfolio, and social charms, Jacques Pépin is undoubtedly one of those exciting personalities you would love to meet. Apart from the fact that he is a world-class, celebrated chef, Jacques has also adequately distinguished himself as a professional instructor of chefs. Now, check this out! He’s a host of 14 known public T.V. series, a prolific writer, and has dozens of published cookbooks. He has creatively advanced the art and craft of culinary techniques, quite as much as other figures, as far as the past century is concerned. Isn’t that exciting? Well, below are more fascinating facts about Jacques Pépin.

Jacques Pépin is the second of three sons, birthed to Jeanne and Jean-Victor Pépin. Now, cooking has been second nature to him from his early childhood, as his parents owned a restaurant, his mother being the chef. The restaurant his parent-owned, Le Pelican, was where Pépin worked after school, often in the kitchen. Then, at the age of 13, he quit school to learn further and improve his culinary/cooking skills. He didn’t intend to work at his parents’ restaurant. He instead decided to work at the distinguished Grand Hotel de L’Europe in his home town, where he learned to cook, merely by watching and imitating the chef.

When he turned seventeen (17), he moved to Paris. There, he started working in some of the distinguished restaurants of the time. First, he trained under Lucien Diat at the Plaza Athénée, and later, he moved on to Maxim’s and Fouquet’s.

In 1956, he worked for the French Navy as a chef. With time, between 1956 – 1958, he became the personal chef to three Heads of state. And guess what, that included Charles de Gaulle.

In 1959, Pépin moved to the United States and worked at the restaurant Le Pavillon. At that time, he wanted to complete his education, and so he applied to study English for international students.

And he subsequently took up General Studies, intending to get a Bachelor of Arts degree at Columbia University, which he earned in 1970. In 1972, he got his Master’s degree – Masters of Art in French Literature from the citadel of Columbia Graduate School of Arts and Sciences.

Jacques Pepin is Married to wife Gloria Pépin since 1966.

Who isn’t interested in celebrities’ love life? Jacques got married to Gloria in 1966, and they’ve been together for fifty-three (53) mind-blowing years, always moving along as inseparable lovebirds. Their story is indeed a special one.

Gloria Pépin, in a granted interview, noted that she met her husband on the Ski ropes. She said he looked handsome, and somehow, she wanted to get along and know him. She, however, admitted that she wasn’t sure of his sexuality, but as they got together, all doubts were cleared.

Even amidst challenges, the couple spends each day intentionally loving each other. Fifty-three years doesn’t come easy. What do you think?

Jacques Pépin was born on December 18th in the year 1935 in Bourg-en-Bresse, France, 35 miles North of Lyon. That makes him about 85 years of age!

You probably have heard the rumor, one way or another, that Jacques’s wife is dead, haven’t you? It’s impressive how rumors spread, even fast. Get set for the truth! Jacque’s wife, Gloria Pépin, isn’t dead! Unfortunately, another Gloria Pépin’s death had been mistaken for hers.

Well, this other Gloria Pépin was the beloved wife of Joseph R. Pépin (also late). And she passed away peacefully on Saturday, November 1st, 2014, at St. Francis Hospital. So, there you have it.

Gloria Pépin, the wife of Jacques Pépin, is fully alive and kicking. Jacques’ wife’s death is a rumor which, deliberately or ignorantly, arose from the mistaken identity of two distinct personalities.

Now, add this to the shelf. Gloria Pépin has been married to Jacques Pépin since September 18th, 1966. They have just one child, Claudine Pépin.

She is the mother-in-law of Rollie Wesen and the grandmother of Shorey Wesen. She has appeared on quite a number of Jacques Pépin’s cooking shows, both in archive footage and in real life.

Jacques and wife Gloria Pépin Have a Daughter, Claudine Pépin.

She’s happily married to Rolland “Rolley” Bailey Wesen as far back as March 23rd, 2003, and they have one child. That is, of course, Shorey Wesen.

Claudine made her first cooking debut show, “Cooking with Claudine,” in 1995. Although she had not learned how to cook, she had worked on culinary jobs several times with her father.

Perhaps it was Jacque’s way of teaching her the art of cooking. Boom! The father/daughter duo became a PBS TV hit!

Did Claudine go to school? Sure, she did. After all, her father is a graduate as well. She has a first degree in Political Science and Philosophy. And she also notably graduated from Boston University with a Master’s degree in International Relations.

He has a granddaughter Shorney Wesen.

Jacques Pépin, on one occasion, asked his then two-year-old granddaughter, Shorey Wesen, if she liked blueberries of which she affirmed in the positive.

She got early brightness as regards food, and this wasn’t surprising because her father and grandfather are professional chefs themselves. Plus, her mother cooks a whole lot using fresh ingredients.

At the age of 5, Shorey frequently visited her grandparents, primarily because of her interest in helping her old man cook. She practically grew enthusiastic and comfortable in the kitchen early on.

Both Shorey and her mum loved to eat what grown-ups eat, and this developed a gourmand’s palate for them. In the long run, it birthed Jacques’s longstanding philosophy that “great meals are always the ones that are shared with family and friends.” It formed the basis for A Grandfather’s Lessons: In the Kitchen with Shorey (Houghton Mifflin Harcourt, 2017).

Jacque Pépin is not without a plethora of exciting accolades. Definitely, he is. Below are some awards and honors conferred on him:

Jacques Pépin is a French chef, a T.V. personality, and an author whose net worth amounts to a sum of $20 million. He has amassed wealth from food, T.V. engagements, books, and of course, his services over the years.

Pépin earned a B.A. and M.A. from Columbia University. In 2000, he hosted the television series Julia & Jacques Cooking at Home. From 2013 to 2014, he frequently appeared as a chef on the T.V. series, Rachael Ray.

For Julia & Jacques Cooking at Home, Pépin won a Daytime Emmy Award in 2001 for Outstanding Service Show Host and had been nominated for the same award in the previous year, 2000. Below is a shortlist of his television engagements.

In 1970, Pépin actually launched a specialty soup restaurant and lunch counter on Manhattan’s 5th Avenue, naming it La Potagerie. However, the restaurant was closed in 1975, a year after he had a near-fatal car accident in 1974.

He and his partners could not agree on specific terms in the restaurant. After his accident, he became a restaurant consultant. He started working for the restaurateur, Joe Baum, towards his Windows on the World project.

These are from Jacques Pépin’s Heart & Soul

And, there you have it, 11 interesting facts about JACQUES PÉPIN you should know – Now you know!