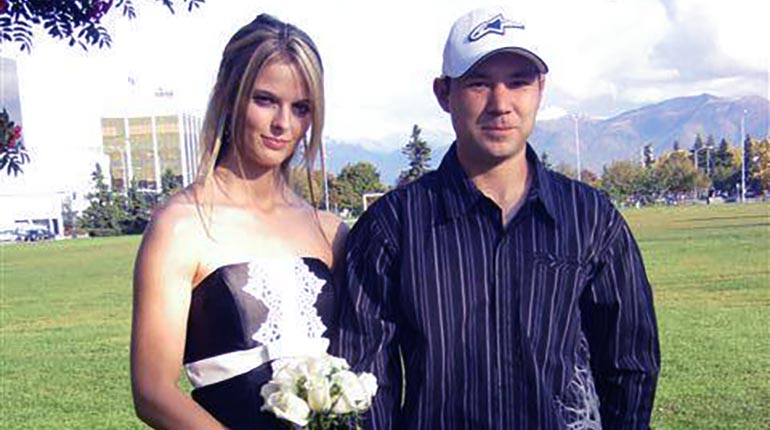 Lisa Kelly is an American reality star known for her work in the hit reality show, Ice Road Truckers. The show debuted in June 17th, 2007, on the History Channel, becoming an instant hit. The Ice Road Truckers reality star has proven that women too can excel in jobs conventionally perceived to be only men’s.

She has made the show popular, as fans are intrigued to see a woman trucker driving a big rig. Grab your winter coats and join us as we traverse the frozen waterways of Alaska to learn more about Lisa and her trucking career.

Lisa Kelly Is still married to her husband Traves Kelly.

Lisa Kelly met her husband, Traves Kelly, back in 2004. At the time, she was shopping for a Kawasaki dirt bike in Alaska. They two soon fell for each other and started dating. Later on, Traves popped the big question, and luckily for him, Lisa said yes.

After dating for a cool four years, the wedding bells rang, and it was time for the love birds to tie the knot. The lovely couple had a private wedding ceremony in 2008 in the presence of their close family and friends.

Lisa and husband Traves Kelly loves and supports each other in their lives and careers. Lisa revealed in an interview at the Great American Truck Show that she has a very understanding husband. He always supports her career, which demands long periods away from home. These usually last even up to four months.

The lovely couple is yet to have any children, probably due to Lisa’s hectic always-on-the- road career. Traves and his wife have their home in Wasilla, Alaska.

Who is Traves Kelly?

Traves Kelly was born and raised in Alaska, United States. The reality star’s husband has a big passion for bikes and loves dirt biking. Moreover, he is a skilled motorbike mechanic. However, Lisa Kelly revealed that her husband switched careers and is now a plumber, adding that the Alaskan life is a weird one. She made this revelation during an interview she did in the Great American Truck Show that was hosted in Dallas, Texas, USA.

Kelly started her trucking career about 16 years ago. Before getting a job as a freight hauler, she worked as a school bus driver and a freestyle motor cross champion rider. The Ice Road Trucker reality star also worked in a gas station. She was also a pizza delivery truck driver.

Afterward, she got a job with Carlisle Transportation as a freight hauler. Luck came knocking on her door when she got the offer to be part of the cast of the Ice Road Trucker reality show.

The show chronicles the process of hauling tens of tons of cargo through the frozen waterways of Alaska by skilled truck drivers. She joined the show in 2009 when it was in season 3 as the only female trucker cast.

Ice Road Truckers Lisa Kelly was to have this title until season five when another woman joined the cast. The presence of a woman trucker gave the show good ratings and saw it film 11 seasons until 2017, a good solid decade on our screens.

Kelly loves her job as she says it has allowed her to go to cool places. She also revealed that most of her fans say that she doesn’t look like a truck driver when they meet her in person. However, the beauty of life is that one doesn’t need to fit a certain stereotype. We can do whatever we like.

Ice Road Truckers Lisa Kelly isn’t just a pretty face on set. She is a hardcore truck driver who puts her life on the line every time she sits behind the steering wheel of her 22 wheeler. To illustrate that, we should point out that she once had to jump out of her monster rig as it was in motion because the ice beneath it started to break up.

Lisa’s role on the show goes beyond just being a woman; instead, it shows that women are just as capable as any man out there. Esquire magazine, a men’s magazine, once referred to her as ‘the sexiest trucker alive’ for her impressive skills and hardworking personality.

Her work in the show was so good that she was offered a chance to cast in the show’s spin-off, Ice Road Truckers: Deadliest Roads. The spinoff saw her go through Peru, Bolivia, and India featuring dangerous tracks such as those found along The Himalaya Mountains. The Ice Road Trucker described the experience as being unlike any other experience she had ever had in her life and career.

Lisa Kelly’s impressive work hasn’t gone unnoticed by the corporate world, either. She was approached to be the brand ambassador of Delo 3 years ago. Delo is an oil that is specially made for heavy-duty machines by the Chevron Products Company. It also serves as another stream of income for the Ice Road Truckers reality star.

The Ice Road Trucker star was born on December 8th, 1980 in Grand Rapids, Michigan. She is a Sagittarius Zodiac. Lisa is 40 years old as we speak.

Her family moved to Sterling, Alaska, when she was 6 yrs old. The truck driver grew up with tomboy tendencies such as a passion for driving, and dirt biking. She attended Cornerstone University for one semester and dropped out, returning to Alaska. The Delo oil ambassador decided to learn truck-driving in the Alaskan Haulage Company.

Lisa Kelly is an animal lover.

Kelly is an animal lover. It is evident from her social media. Lisa loves posting photos of her cats, dog, and horses. On January 23rd, 2020, the reality star posted a photo of her adorable Bambino cat on Facebook, who, sadly, is no more. She wrote a heartfelt message saying that her cat died that morning. We hope her lovely cat rests in eternal peace.

During her free time, the Ice Road Trucker cast likes to engage in an active outdoor lifestyle. These include activities like ice boarding, dirt biking, horse riding, and hang gliding. She even flew an F-18 fighter Jet at one point! Without a doubt, Lisa loves her adrenaline dose.