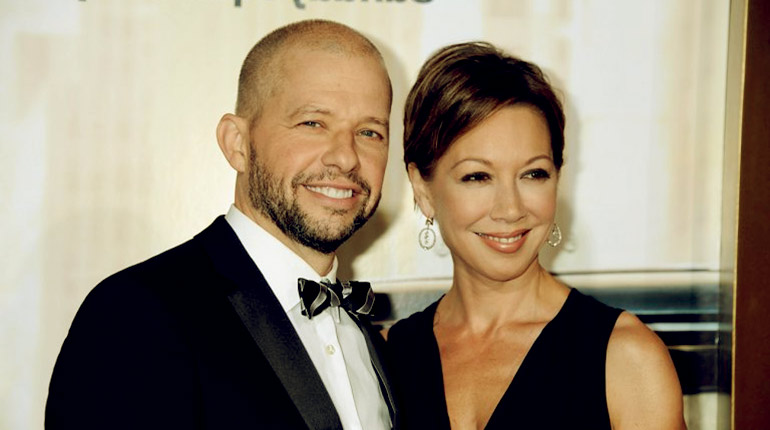 Lisa Joyner is a famous American reporter and actress. She is known for being an entertainment reporter on the segment, InFANity, on the TV G. Lisa has also worked as a co-host in reality television. Joyner’s reality shows, such as Long Lost Family, focus on the topic of adoption.

It is a word that has played a vital role in Lisa’s life, as she, too, was adopted. Moreover, the Long Lost Family host has adopted a daughter as well. Let’s take a look at Lisa Joyner’s inspiring life story and her successful career.

Interestingly, the couple’s last names have two antonyms, cry, and joy. One wonders if Jon married Lisa to bring some joy into his life since his name suggests that he likes crying.

Pun intended, by the way. In all seriousness, though, Jon and Lisa, are a perfect match for each other. Both are celebrities, and they can relate on that front. A match made in heaven, we suppose.

Their engagement and marriage.

The lovely couple got engaged in early 2007. Jon was so excited that he broke the news on television on the Tonight Show with Jay Leno, in February 2007.

After a few months, the wedding bells rang, and the couple tied the knot on June 16th, 2007. Their wedding was done in Mexico. Judging from their social media, it is apparent that the couple loves each other very much. Lisa loves posting photos of her husband on Instagram with loving messages.

To illustrate, on 20th April 2019, the InFANity segment reporter posted a photo of herself, kissing her husband’s cheek. She captioned the picture with a happy Husband Appreciation Day message. She also got candid writing that she had never wanted to get married until she met him.

The couple has one child together, a lovely daughter named Daisy. The Long Lost Family host and her husband adopted Daisy in 2009. Their beautiful daughter was born on August 11th, 2009, and they adopted her shortly after.

During his Emmy acceptance speech, on September 20th, 2009, Jon announced that he had adopted a baby girl with his wife. It seems that Jon has a thing for announcing his life milestones in front of an audience. Indeed, it is adorable, and it shows how excited he is for his life’s important milestones.

It is important to note that Jon Cryer also has a son from a previous marriage. His son’s name is Charlie Austin.

On June 27th, 2018, Lisa posted a photo of her stepson’s birthday cake on Instagram. She then wished Charlie a happy 18th Birthday. The Long Lost Family host then added that she was proud of him and that she was excited about his future.

Her Parents, Ethnicity, and Nationality

Lisa Joyner was born on December 31st, 1966, as Lisa Marie Joyner. She was born in San Diego, California, in the United States.

The Long Lost Family host revealed in an interview with TLC that she was placed for adoption immediately after birth.

The InFANity segment reporter was then placed in foster care. She got adopted after three months. The Long Lost Family host’s adoptive parents were of Caucasian and Asian ethnicities.

As she was growing up, Lisa often got questioned why her parents gave her away. It made her feel sad and prompted her to want to meet her birth parents. In the interview with TLC, she also revealed that she wanted to heal her primal wounds.

Moreover, she desired to know her ethnicity, which many people had always asked her about. What stood out during the interview was when Lisa said that she had also wanted her birth parents to know that she was okay.

The InFANity segment reporter began searching for her birth family for some years, but with no luck. One day, she got a message from a viewer when she was working at a FOX television station. The viewer informed Lisa that she could help her find her biological parents.

Fortunately, both of her parents were willing to meet her. Joyner revealed that she met her half-sister and her niece, both of whom she’s very close to. She also reunited with her extended birth family in San Diego.

A look at Lisa Joyner career

Lisa Joyner began her career in television as a sports intern at the Los Angeles-based KNBC-TV. The Long Lost Family host then moved to Texas, where she got a job working as a weekend anchor.

She also did reporting and producing when in her time there. Joyner was then promoted to the health reporter and the 5 pm news anchor.

After her stint in Texas, the Long Lost Family host returned to Los Angeles. She got a job as an entertainment news reporter for KCBS-TV and KTTV-TV. Later on, she got a job with TV Guide Network to host a show named InFANity. It was this show that made her more famous than ever before.

Joyner then became a co-host on two reality television shows that focused on adoption. One of the shows was Long Lost Family, which she co-hosted with Chris Jacobs.

Interestingly, both Jacobs and Lisa were adopted, and thus, they were the perfect hosts for such a show. The other show Lisa hosted was Find My Family. It aired on ABC.

She is the second wife of Jon Cryer

Before meeting his loving wife, Lisa Joyner, Jon Cryer had been married to an actress named Sarah Trigger. The couple had gotten married in 1999 and divorced in 2004. They had one child together, a son named Charlie Austin. Lisa, on the other hand, was not previously married before she met Jon.

Joyner is active on Instagram on her handle, @mslisajoyner. Joyner has 10.2k Instagram followers. She loves posting photos of herself, her husband, and her dogs.

She also loves showing off her beautiful home-cooked dishes. The Find, My Family host, is also on Twitter with 7,0879 followers. Her Twitter handle is @mslisajoyner.

Lisa Joyner’s wiki, net worth, and other facts.