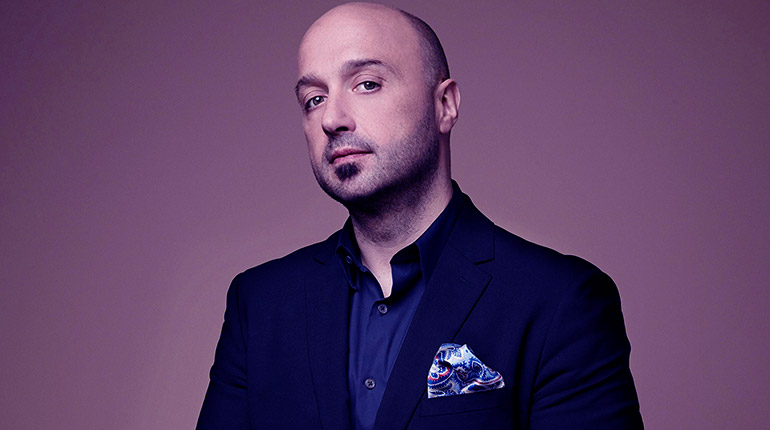 Joe Bastianich is a New York-based Celebrity Chef and restaurant owner. He grew up in a family that loves and celebrates food — After following in his parents’ footsteps, he partnered with his mother, Lidia Bastianich – another renowned chef to open a few establishments.

And together, they birthed the Batali & Bastianich Restaurant Group. We have several fascinating facts about him, his net worth, married life, and family summed up for you in this writeup. Enjoy!

Joseph Bastianich was born on the 17th of September, 1968, in Astoria, Queens. This means he’ll be 54 years old in September.

Joe’s parents are Felice and Lidia Bastianich. They were Italian immigrants who moved to the U.S when he was still young. He was practically raised in his parents’ Italian restaurant, Felidia, which is based in Manhattan.

Joe went to Fordham Preparatory School and then subsequently attended Boston College. This is where he studied finance. Joe Bastianich lives in New York City with his wife, Deanna, and they have three children – Olivia, Ethan, and Miles.

His steady life as a successful chef.

Well, yes, he’s not just a chef; he’s a Master Chef! After Joe spent a year on Wall Street as a bond trader, he gave that career up and embraced the food industry.

He took an extended trip to Italy. After this, he opened Becco, an Italian restaurant, with his mother’s help. Joseph subsequently partnered with Mario Batali to open Babbo Ristorante e Enoteca. This Italian restaurant gracefully earned the prestigious three stars from The New York Times, the first Italian restaurant ever to gain the award in 40 years.

Their culinary empire has expanded to several restaurants in strategic places:

Joe co-owns the Batali and Bastianich Hospitality Group. They have successfully opened restaurants in New York, such as Eataly, Esca, Lupa, Casa Mono, Bar Jamon, Otto, and Del Posto. One of their restaurants, Del Posto, was awarded four stars by the New York Times in 2010.

Joe has expanded the restaurants in Hong Kong, Las Vegas, Los Angeles, Singapore, and Chicago. It will interest you to know that even beyond the restaurant business, Joe owns three large wineries, including Brandini, La Mozza winery, and Bastianich winery.

Here’s a comprehensive list of all restaurants Joe Bastianich owns and co-owns.

He’s also a notable author. And one of his significant works, Restaurant man, became a New York Times Best Seller right within a week of its release in May 2012. Below are other published works he authored.

He has also been in some movies, namely;

Bastianich is an American television personality, food writer, and restaurateur. His net worth is $20 million. When Joe’s parents divorced in 1997, his father transferred his shares to Joe and his sister, Tanya. Joe Bastianich also teamed with chef Mario Batali and went on to open Babbo Ristorante e Enoteca.

With his partners, Joe continued to open seven more restaurants in New York City. They have also opened restaurants in Los Angeles, Las Vegas, and Singapore. It will interest you to know that Joe has co-authored two books with wine expert David Lynch.

Joe Bastianich and Batali received the James Beard Foundation’s Outstanding Restaurateur Award in 2008. His appearances on the TV shows are also substantial contributors to his wealth.

Joe Bastianich purchased a $7.18 million condo in 10 Madison Square West Pad. The house has four bedrooms, a master suite with two dressing rooms, and locker rooms. It has steam and sauna facilities. All of these substantially add to Joe’s Net Worth, amounting to a whopping sum of $15 million.

Here’s to the spice of his life – his dear wife, Deanna Damiano, as they met through mutual friends in 1992. They were so in love that they moved in together not long after dating for three weeks. They had their grand wedding done on the 19th of February, 1995, at the St. Ignatius Loyola Church, in Manhattan, New York City.

An interesting fact is that their wedding had a guest attendance of 450, which of course, included family members and friends. They have been married for 27 years.

During their 20th anniversary, the lovely couple shared pictures of their romantic trip to Paris, and it was quite a beautiful sight to behold. Unlike her husband, Deanna Bastianich is a private person and chooses to be out of the limelight.

Joe has proven that he can keep quite a stable family life as opposed to the headaches in his career life. He is now living happily with his wife in New York City with their beautiful daughter and two sons.

Not much is known about Deanna, as she keeps a very low and private life. Hence, the exact details of Deanna Bastianich’s birthdate, educational background, early experience, childhood, parents, or siblings are not entirely known to the media.

However, she is two years younger than her husband Joe, so she was born in the year 1970, which makes her about 52 years of age. Also, as per some wiki, it has mainly been speculated that she grew up in quite a large Italian family.

Bastianich is not known to be involved in any profession and work yet. But perhaps, she did freelance employment and assisted her husband as well. What we, however, do know is that she produces handbags for the Associated Merchandising Corporation in New York.

Deanna Bastianich is an Italian by citizenship. However, her ethnicity is not precisely known as well. Could she be a CIA agent? Well, that’s a discussion for later.

After three years of marriage, the couple welcomed their eldest daughter Olivia in 1998. This means that she is 24 years as of now. In 2000, their first son, Miles Bastianich, was born, and he is 22 years now. Finally, Ethan Bastianich was born in 2002, which makes him 19 years now.

He is a famous chef, just like his mum!

Joe Bastianich is a quintessential example of the proverbial expression; the apple doesn’t fall far from the tree. His mother is also a celebrity chef in her own right. She’s a proud Italian immigrant that teamed up with her son to increase and amplify her family-run Italian eatery in Queens into a restaurant empire that includes such Manhattan hotspots like Becco, Del Posto, and her flagship, Felidia! Oh yes!

Like her son, Lidia has also demonstrated a pleasant knack for television. She has hosted several food-themed series for PBS: Lidia’s Kitchen, Lidia’s Italy In America, and Lidia’s Italy. As if it wasn’t enough, she is a notable multiple winner of Daytime Emmys. She has authored numerous bestselling cookbooks, including 2019’s Felidia: Recipes from My Flagship Restaurant.

There are two notable awards accredited to Joe Bastianich. The first was in 2008, where he and his friend/business partner and fellow chef won the Outstanding Restaurateur Award by the James Beard Foundation, which is undoubtedly a huge one. Also, ten years later, in 2018, he expressly got the America Award of the Italy-USA Foundation 2018.

Joe Bastianich isn’t just a celebrity chef and TV personality; he’s also a musician and a good one at that. I mean, he is way beyond just jamming with buddies in a garage band. You should know that he and his group, The Ramps, have performed in Italy.

In the year 2014, he exquisitely hosted his mini-music festival at his restaurant and B&B Orsone, in the environs of the Italian village of Cividale del Friuli.

Added to this, he has also performed on Italian TV, appearing on Amici Celebrities and rocking a cover of Prince’s “Purple Rain” on the Italian music series Dopo Festival! Quite impressive, right? He even recorded his solo debut in 2019, an album titled AKA Joe.

For Bastianich, music is a form and medium of relaxation and not just a creative channel.