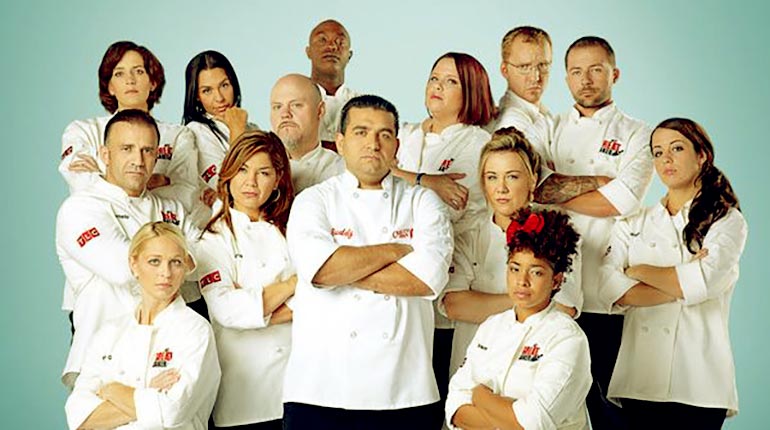 Cake Boss is an American reality series that is centered on cake baking. The show premiered on TLC on April 19th 2009. Cake Boss follows the owners of Carlo’s Bake Shop and their employees as they make their edible cake art. 5 Italian-American siblings own the shop, with their leader being Buddy Valastro, dubbed ‘the Cake Boss.’ Read to know about Cake Boss cast.

It also focuses on their relationships with each other. Cake Boss has been a hit with ten seasons and about 236 twenty-two-minute episodes. Bring your appetites as we visit the cake universe of the cast and learn more about them.

To know about the famous Buddy Valastro’s net worth and salary, stay tuned.

Buddy Valastro is the boss of Carlo’s Bake Shop. The Cake Boss is known for being jovial and enthusiastic in his work. Buddy has appeared in 234 episodes from 2009 to 2020. He has also been termed as the glue that holds his family together, and it’s not hard to see why. Buddy is in charge of the bakery’s primary operations.

He took over running his family’s bakery after his dad passed on when he was 17 years of age. Without a doubt, he has done an excellent job, as the bakery has expanded to other parts of the country and the world. Buddy has a net worth of about $10 million. He is reported to make about $80,000 per episode of the show.

Herbert is a pastry chef at Carlo’s Bake Shop. He goes by the nickname, ‘Sugar Daddy.’ We hope his name has to do with the fact that he makes sweet cakes and not the other adult version. Jokes aside, Dana is a talented cake artist who won the cake competition organized by Carlo’s Bake Shop. Consequently, he was awarded an apprenticeship at the shop.

Aside from the apprenticeship, he also won a car and $50,000. Another interesting fact about Dana was that he attempted to break the Guinness World Record for baking the biggest wedding cake. He indeed has a competitive spirit in him, and we urge him to keep it up.

Aside from working at Carlo’s Bake Shop, Herbert also owns his bakery named Desserts by Dana. Details about his net worth have not been revealed, neither has his salary from the show. However, we are sure he is living a comfortable life.

Castano is Buddy Valastro’s brother-in-law. He is married to Maddalena Castano, Buddy’s second oldest sister. Mauro works at the bakery’s front counter and is Buddy’s, right-hand man. Mauro was born in Italy. He later moved to the United States when he was 12 years of age. Castano is known to be a gentle person in Carlo’s Bake Shop.

He also has the most mature sense of humor on the show. Mauro is a skilled pastry chef with years of experience in cake baking and decoration. Castano was first featured on the Cake Boss show on April 19th, 2012. He has been featured in about 200 episodes of the show. Unfortunately, neither his salary nor his net worth is available as of now.

Maddalena is Buddy’s second eldest sister. She is married to Mauro Castano, who works in their shop too. Maddalena is said to be the calmest of all the siblings of the Valastro family. On August 15th, 1967, Maddalena was born in New Jersey, United States.

Like most Leo personalities, Maddalena is passionate, warm, and charismatic. She usually calms down situations in the shop and tries to bring about some semblance of sanity. She mostly works at the front desk with her husband, Mauro, but is also a talented pastry chef.

Maddalena has been working in her family’s cake shop for many years since she was a teenager. She was featured on the show from 2009 in season one and has appeared in 234 episodes. Maddalena is estimated to be worth about $1.5 million. However, her salary on the show is currently not known.

Joey Faugno is Buddy Valastro’s brother-in-law. He is married to Buddy’s oldest sister, Grace Valastro. Joey works as the head pastry chef at Carlo’s Bake Shop. Interestingly, Joey worked in the United States Air Force before joining Cake Boss. It is reported that he also works as a firefighter. Joey was born in 1967, and he is 53 years old in 2020.

Joey is a father of two children, Bartolina and Robert Faugno. Joe Faugno has been featured in over 200 episodes of the show from 2009 to 2020. Joey is known to be very quiet, a stark contrast to his loud, bigger than life Valastro family. He loves to keep to himself.

However, his personality shines through when it comes to baking. Joey can handle even the most outrageous cake orders, making outstanding television in the process. Joey’s net worth is estimated to be $5 Million. It is no surprise considering he is the head chef of the bakery. His salary from the show is still not known.

Sciarrone is the third oldest sister of Buddy Valastro. Mary was born on September 30th, 1969, in the USA. She will be 53 years old in 2022. Her Zodiac sign is Libra. Mary is known to have an extroverted character, just like most of her family.

Mary is a cake consultant for Carlo’s Bake Shop and doesn’t bake cakes in the shop. She is known to have exceptional managerial and problem-solving abilities. Aside from that, she is also a loving mother of two. Her children’s names are Joseph and Lucia.

She is also a loving wife to her husband, Joe Sciarrone. Mary has been featured in over 200 episodes since the show began in 2009. The Cake Boss cast member is estimated to be worth $850,000.

Amato is Buddy’s second cousin. Frankie, aka Frank, was born on August 29th, 1978. He is a Virgo Zodiac. Frankie was born in Hoboken, New Jersey. He is a talented cake decorator in Carlo’s Bake Shop. Frank has a boisterous character, just like most of the Valastro’s.

Consequently, he makes the show fun to watch, and he is a fan favorite. His mother and Buddy’s mother are first cousins. Frankie has been featured in over 230 episodes of the Cake Boss show since 2009. Frankie’s net worth is estimated to be about $5 Million.

However, his salary per episode of Cake Boss is still undisclosed. Interestingly, Frankie is a divorcee and a father of two children.

Dragone is undoubtedly one of the most experienced pastry chefs in Carlo’s Bake Shop. Moreover, he is also the oldest person in the shop. He started working in the bakery with Buddy’s father even before Buddy was born.

Danny is a skilled cake decorator, and he is nicknamed ‘the mule’ by his co-workers. Aside from decorating, he serves in multiple roles too, and is the king of versatility. Danny is known to have a very charming and endearing personality.

Consequently, he is one of the fans’ most beloved. Danny hails from Italy but moved to the United States later. He is also a father of two children. Danny is also a divorcee.

Danny is known to have shaved off his legendary 30-year mustache to raise funds for Make-a-Wish New Jersey. His net worth is estimated to be $4 Million. His salary per episode of their show is still not known. Danny has been featured in over 230 episodes of Cake Boss since 2009.

Valastro is Buddy Valastro’s mother. She was the matriarch and mother of the 5 Valastro siblings of Cake Boss. She was also the owner of the shop which she had run with her late husband. Mary was born in 1948 in Italy. Unfortunately, in 2017, she lost her battle to Amyotrophic Lateral Sclerosis. Mary had been battling the disease since 2012.

She was 69 years old at the time of her death. Mary was a regular on the show from 2009 to around 2012 before her illness got worse. She had been working in their business until 2010 when her age led her to retire. Her death was a big blow to her family and her fans. Thankfully, she can rest in peace, knowing that she left behind a great legacy and a united, loving family.

Anthony Bellifemine is the cousin-in-law to Buddy Valastro. He is the cousin of Buddy’s wife, Lisa. Anthony started working in the bakery as a delivery boy but has since worked his way up. Happily, he is now a baker in Carlo’s Bake Shop. He was born in America in East Hanover, New Jersey. Aside from baking, Anthony loves to DJ too.

He is one of the youngest among Carlo’s Bake Shop staff. Consequently, he finds himself being the butt of many jokes from his co-workers. He has been the victim of many pranks, but he always took them reasonably well.

Fortunately, he has managed to gain his respect as a skilled pastry chef. He has been on the Cake Boss show since 2009 and has been featured in over 200 episodes. Anthony is estimated to make an annual income of $100,000. His net worth is estimated to be about $1 million.