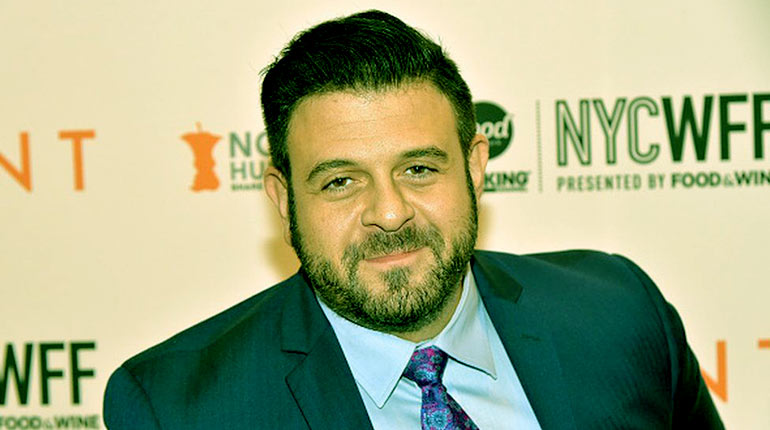 Adam Richman is an American actor. You might have recognized him from the TV show, Food Fighters, Man V. Food, and other shows. He is not only an actor but also a TV presenter. Adam has managed to make himself more famous each year. In 2010, he published a book called, America the Edible: A hungry history from sea to Dining sea.

Later in 2015, he published his cookbook, ‘Straight up Tasty: Meals, Memories, and Mouthfuls from my Travels. We are going to learn more about Adam Richman, his net worth, career age, and relationship. Let me take you through his life.

Adam has a standing net worth of 10 million dollars. He has been active on media ever since 1995. For over 20 years, Adam has been working hard as an actor and TV presenter, slowly increasing his net worth.

When he was still on the food show, Man V. Food, he would make $ 35k in each episode. He did not only host the show; he was also the executive producer. Adam also had small roles in series like Law and Order. He had been the spokesman for Zantac. It is a heartburn relief brand. According to pay scales, spokespeople make around $56,500 yearly.

He has a fantastic story on how he went from being a struggling actor to what he is now—a TV presenter with a net worth of $10 million.

There have been a lot of questions about why he left the show. And fans went all the way to give their assumptions such as him being sick. According to Adam, leaving the show was his decision and nobody else’s. Adam had already gotten tired of the show, and he wanted to go before his fans asked him to try something new.

That was the reason why he left the show. Casey Webb replaced Adam Richman. The show wasn’t the same without him, and his fans were not pleased with Casey at all. The second reason why Adam left the show was that he wanted to do other programs. So he had his show called Man Finds Food, which airs on Food Network.

Leaving Man V. Food was not his curtain call; he still starred in other shows like Food Fighters and Adam Richman’s Best Sandwich in America. It proves that the rumors about his illness were false because he continued to appear in food shows.

Is Adam dating? His whole life has been an open book. However, when it comes to giving out information on his love life, he completely leaves us in the dark. His fans have been asking and wondering who Richman is dating, but they have never had any luck finding out.

Back in 2015, when he was a judge in BBQ Champ, there were rumors that he was going out with the host, Myleene Klass. Just because they looked good together, viewers went ahead to assume that there was something between them. As far as we know, Adam Richman is a single man.

Adam Richman lost 70 pounds after he retired from competitive eating. With the help of following a low carb diet, he managed to lose that much weight in 10 months. Playing soccer and running was also a good and fast way for him to stay fit. It helped him in losing weight.

After Adam Richman left Man V., food, he spent his days exploring and sharing every bit of information she had on foods. He has been a host to various shows. Adam posted on social media that he would be teaming up with the series, ‘The Food that built America.

Adam Richman was born on 16th May 1974 in Brooklyn, New York. His parents are Jeffery and Sharon Richman, and they are of Jewish descent. He graduated from the University of Emory with a degree in International Studies.

Later on, he obtained his Master’s Degree at Yale School of Drama. Richman is 1.83m tall and looks great for a 47-year-old after he dropped some weight.